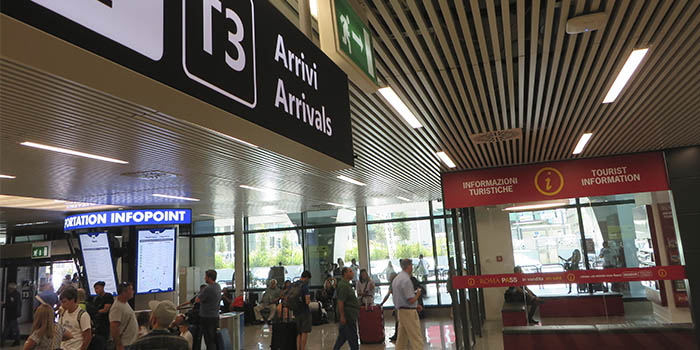 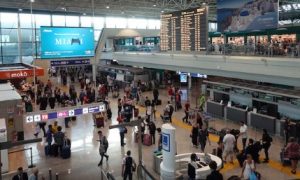 If you have traveled abroad at all, you know that you need some patience to navigate the large airports.

Add to that the fact that you just got off a pretty lengthy flight to find yourself in place that no longer has English as the native tongue, and you can have quite a challenge.

Truthfully, I expected much more chaos in the Rome airport than we encountered.  Deplaning and going through customs was really pretty straight forward.  However, once you step out of that “protected” area—the challenge begins.

Make sure you have some euros

Rather than changing money at the bank or one of the money exchanges we just used our ATM card and got Euros from the ATM (if this is your preference, you may want to check with your bank to ensure that you can do that with your ATM card).  We were then ready to arrange for our trip to the city.

You know you’ll need the Euros for some impulse buying, whether it’s some souvenirs, some Nike shoes for nurses (if you have a nurse friend), necklaces, etc.

There are three primary ways that we knew of to get to downtown Rome:  the train, a private car, or a taxi.  Since we were not yet oriented, we weren’t ready to tackle the train system.  We didn’t think  it necessary to go through the expense for a private car.  So we got a taxi

We knew to NOT use anyone that approached us in the airport offering a taxi downtown.  Instead, we went to the taxi line at the curb.

Getting a taxi into Rome

We expected to see a dispatcher at the front of the line directing people to the next taxi.  Not the case.  We just had to look like we knew what we were doing (ignoring all the people yelling “hey lady, need a ride?”), walk until we thought we found the front of the line, and go with one of the several taxis that were vying for our business.

We also knew to ask for an approximate cost in advance.  Of course, the driver acted very insulted (he insisted that it would be”‘whatever the meter said”).  We told him that we just wanted to make sure we had enough money to pay him and he finally told us would be 50 Euros plus or minus.  Now we had a deal.

You know everything that you’ve heard about ‘crazy Italian driving’?   It’s true.

Our driver was going at a pretty good speed, squeezing through places that I felt like I had to inhale deeply to make sure we fit, and talking on his cell phone (loudly) most of the time with hand gestures and all.

We did make it safely to the hotel where our driver nosed into a parking space with the back end of the car sticking into traffic.  He quickly pulled our luggage out of the car, put it on the sidewalk and impatiently told us the amount (52 Euros).

Here was our mistake—we allowed ourselves to be rushed by him.  I went to stand guard by the luggage while my husband was paying him with our new Euros (not a good time to rush when you are jet lagged and handling foreign money).

The driver did a quick sleight of hand and told Paul that he mistakenly handed him a 10 Euro instead of a 50.  I’m sure I don’t need to tell you what we discovered when we got to the room and re-counted our money.

Boy, did we feel silly!  We are both very experienced travelers and we fell for a Rookie 101 trick.  I don’t know whether I was more upset about the ‘lost’ money, the deception, or the fact that we fell for it!

How to avoid this scam

Editor note: According to eturbonews.com, Rome’s largest taxi cooperative is trying to improve the bad name of the city’s cabbies, notorious among tourists to one of the world’s best loved cities.

Taxi company Radiotaxi 3570 has launched a system for tourists to pay on line before they leave home.

“We want to change the public’s perceptions about Rome taxi drivers,” said 3570’s Chairman Loreno Bittarelli at a press presentation, adding that the same services would soon be available in other large Italian cities.

The on-line booking system will also allow tourists to order a cabbie who speaks English, French, Spanish or German. Another scheme will let customers order and pay via telephone text message.

Improving the image of taxi drivers is part of a broader attempt to spruce up services for visitors and end scams.

Advice Regarding Taxis in Rome

Taxis in Rome are white. There are fixed fares from downtown (within the city’s ancient Aurelian Walls) to the airports:

For the most part, Rome taxi drivers are hard-working honest people. But there is a hard core of crooks, and these tend to work the airports and the main station.

Do NOT negotiate the price for the city center with anyone and be sure your driver activates the meter (all regular taxis have a meter) when he or she starts driving to any other destination.

Outside the walls you pay according to the distance. Drivers at the airport may try to talk you into more, saying that your destination is ‘inside the wall’ or ‘hard to get to’. State clearly before you drive away that you want the meter to run.

If they try to overcharge you at your destination ask them to call a policeman. They will probably back down.

Licensed limousine drivers may approach you at the airports, particularly Fiumicino. A drive with them to the center could reach as high as €80.

Be aware as well of unlicensed “taxi” drivers. Go directly to the taxi stand and ignore unlicensed scam artists.