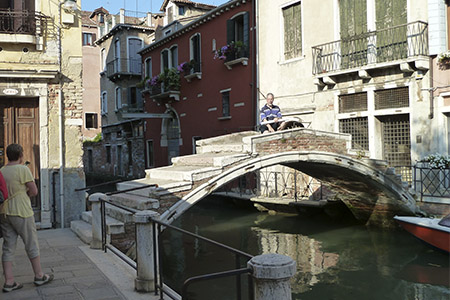 Even though I thought I was  organized, somehow I had forgotten to bring the piece of paper that had the directions to our guest house in Venice. At this point we’re 23 hours without sleep and trudging down a main tourist drag (Strada Nuova) against the current of a  sea of people.

Nonetheless, it was magical We were giggling with delight because even though we were tired and lost, it was just so exciting to be in Venice. Everywhere we looked, there was something stunningly beautiful.  We  walked around for an hour trying to find our guest house. I had the address and phone number, so you’d think I wouldn’t have any problems. Not so.

Not a soul knew where 3749 Ponte Chiodo was

First of all, no-one knew where 3749 Ponte Chiodo was. I learned later that  addresses in Venice do not match up with the streets. I know it sounds bizarre, but there is no street called Ponte Chiodo, even though our address was 3749 Ponte Chiodo.

I do feel obliged to note that the Ponte Chiodo guest house proprietor emailed me several times prior to  my departure to remind me to print the map from the website. If I had that map with me we wouldn’t have had any problems finding the guest house.

We asked at least a half dozen people in the street and shops without any luck. So then we thought, “Well, we have the phone number. Let’s try phoning.” Of course, that involves figuring out a foreign phone and how many of the digits you put in.  We tried every button and every combination of numbers with prefixes and simply could not get it to work. (I wish I’d watched this video on  how to use a pay phone in Italy before I left for my trip.)

So the adventure continued. I went into a little snack bar, and that’s when our luck turned. Go here to read about the kindness of strangers in Venice.